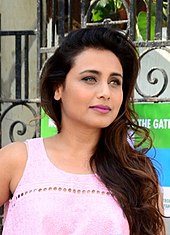 Rani mukherjee is an Indian actress. She has won several awards, including seven Filmfare Awards. Her film roles have been cited as a significant departure from the traditional portrayal of women in Bollywood. Although Mukerji was born into the Mukherjee-Samarth family, in which her parents and relatives were members of the Indian film industry, she did not aspire to pursue a career in film. However, while still a teenager she dabbled with acting by playing a supporting role in her father's Bengali language film Biyer Phool (1996) and later accepted a leading role in the 1997 social drama Raja Ki Aayegi Baraat on the insistence of her mother. She then began a full-time career in film and gained recognition for a supporting role in the romance Kuch Kuch Hota Hai (1998). After this initial success in her career, Mukerji's films fared poorly at the box office for the next three years. Her career prospects improved when Yash Raj Films cast her as the star of the drama Saathiya (2002). By 2004, Mukerji had established herself as a leading actress of Bollywood with roles in the romantic comedy Hum Tum and the dramas Yuva and Veer-Zaara. She achieved further success for portraying a deaf, blind and mute woman in the acclaimed drama Black (2005) and an unhappily married woman in Kabhi Alvida Naa Kehna (2006). Mukerji then collaborated with Yash Raj Films on several unsuccessful films which led critics to criticise her for choosing poor roles and pairing with the same set of actors. The semi-biographical thriller No One Killed Jessica (2011) proved to be her first box office hit in four years, and she followed it by starring in the successful thrillers Talaash: The Answer Lies Within (2012) and Mardaani (2014). In addition to acting in films, Mukerji is involved with several humanitarian causes and is vocal about issues faced by women and children. She has participated in concert tours and stage shows, and featured as a talent judge for the 2009 reality show Dance Premier League. Though she is reticent to discuss her personal life in public, her off-screen life is the subject of substantial media coverage in India. She is married to filmmaker Aditya Chopra, with whom she has a daughter.